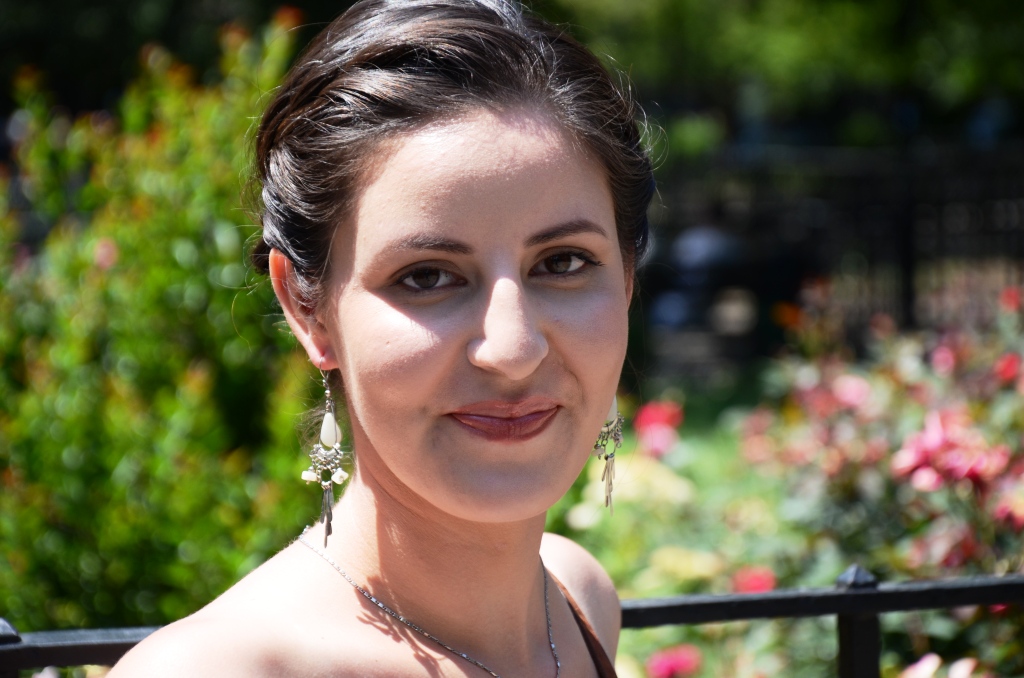 Sidney: Tell us a little bit about yourself and what you do.
Javinia: My name is Javinia, I’ve lived in a few different places in New York, and I make South American inspired confections for The Sugar Coup NYC.

Sidney: You have a very interesting collection of jewelry. Tell us a little bit about where they come from and where you shop for jewelry.
Javinia: Thanks! I bought some of the bracelets, mostly wooden, from Hangzhou at Wushan Night Market. Some of the other bracelets were a gift my friend brought from Lahore and others were a gift my cousin brought from New Delhi. I got the pointy wooden earrings when I was visiting a friend in San Jose, CR. Most of my earrings are from Arequipa and Lima, many were gifts from aunts. 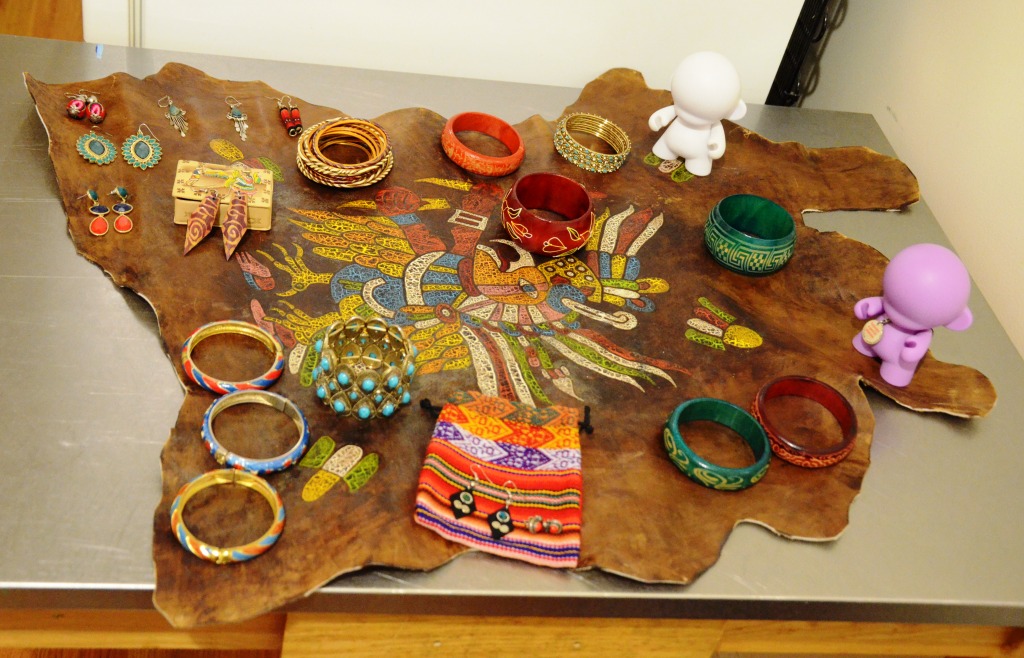 When I want to specifically buy Peruvian jewelry and I don’t foresee a trip in the near future, I go to Tumi in Port Jefferson. When I’m looking for nonspecific jewelry, I love looking at the earrings and just about anything else that Still House carries but I always end up getting them as a gift for someone else. 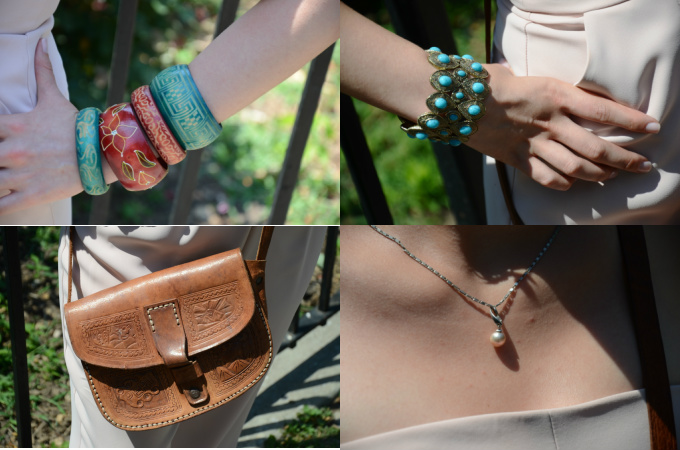 Sidney: How about clothes and shoes? What are your favorite spots in the city or sites online?
Javinia: My two favorite spots to shop for clothes in New York are Something in Mind and Nu New York. I’m always trying to narrow down the number of shoes I have. I have four pairs right now: sneakers, flip flops, heels, and oxfords. I mostly stick to sneakers these days except for some meetings.

The one thing I hate about New York…I honestly can’t think of something that I hate, sorry. 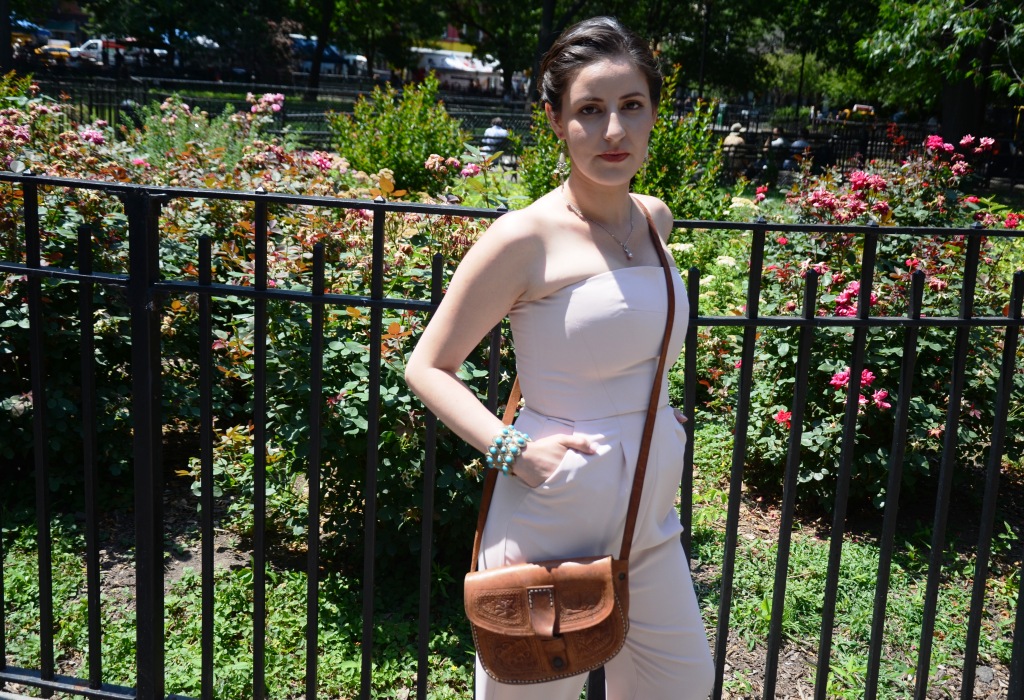 Sidney: Do you partake in the nightlife in New York? What are your favorite spots?
Javinia: My friends and I try to schedule any kind of time in to see each other, it’s usually not at a club or lounge. We usually grab food or hang out at each other’s places. We don’t get to see each other super often so I wouldn’t want to risk going somewhere where I wouldn’t be able to hear the other person.

Sidney: What are your hobbies outside of cooking?
Javinia: Eating. Going to improv shows. Going to The Nuyorican Poets Cafe for open mic. Checking out what’s up on remezcla.com. Going to Americas Society/Council of the Americas events. I’ve been revisiting my old Pinyin notebooks lately, it’s a struggle.

Sidney: Since you attend a good number of fairs in the city, which are your favorite ones, both as a vendor and as a customer/visitor?
Javinia: As a visitor, my favorite is Hester Street Fair. My favorite vendors there are WanderNosh and Mamak. As a vendor, it’s challenging to pick a favorite fair because I’ve learned so much from each one. I’m going to be at Brooklyn Night Bazaar for all of July, and I haven’t gotten the chance to go as a visitor yet so I have no idea what to expect other than music, lights, and lots of food. 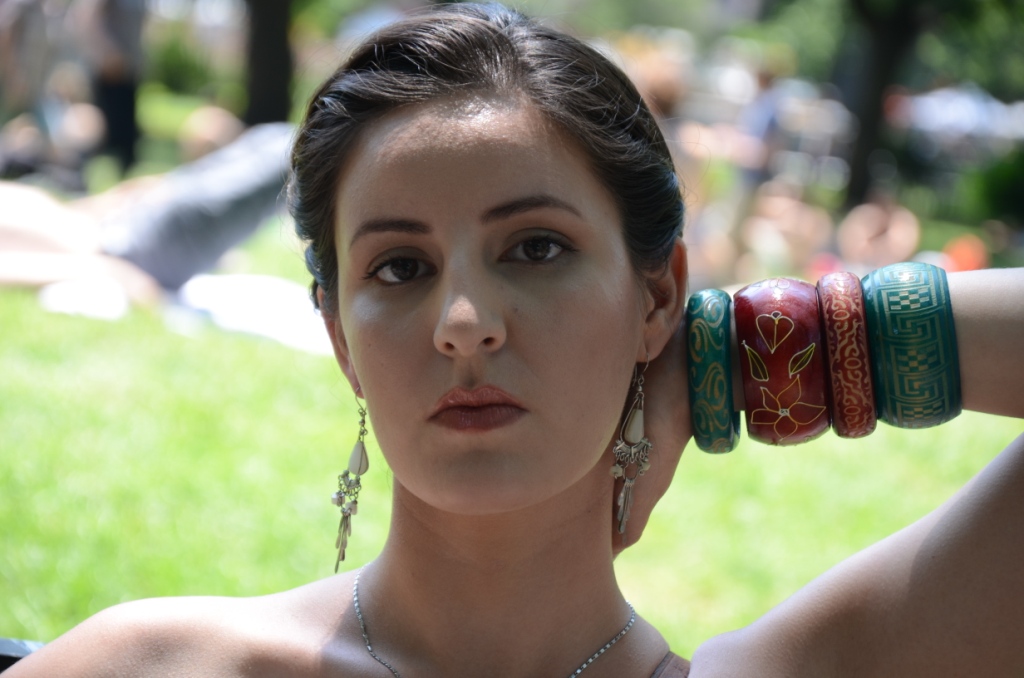 Sidney: Which neighborhoods in the city do you like the most?
Javinia: I like the area that used to all be considered “Lower East Side”. Outside of Manhattan, I like going to Flushing and Astoria. I lived in Astoria for under a year, I still go to visit one of my friends. Last week I went to The Paper Factory Hotel on 36th Street, to meet some of the Mundo team. I’m really excited for them to open up their restaurant. They gave me so many recommendations, they were super sweet.

Sidney: Where all have you traveled to, both inside the US and abroad? Which city did you personally feel had the best sense of fashion?
Javinia: Inside the US, I’ve traveled to most of the cities that lay on the East Coast as well as Chicago, Seattle, and Los Angeles. Outside the US, I’ve traveled to Costa Rica, The Dominican Republic, Peru of course, Germany, Austria, Finland, Netherlands, Czech Republic, India and China. I’m not able to qualify any area as having a better sense of fashion over than another, but the most prominent fashion memory I have is from being around students in Hangzhou in 2009. I remember an abundance of dresses with ruffles and lace paired with pearl necklaces. 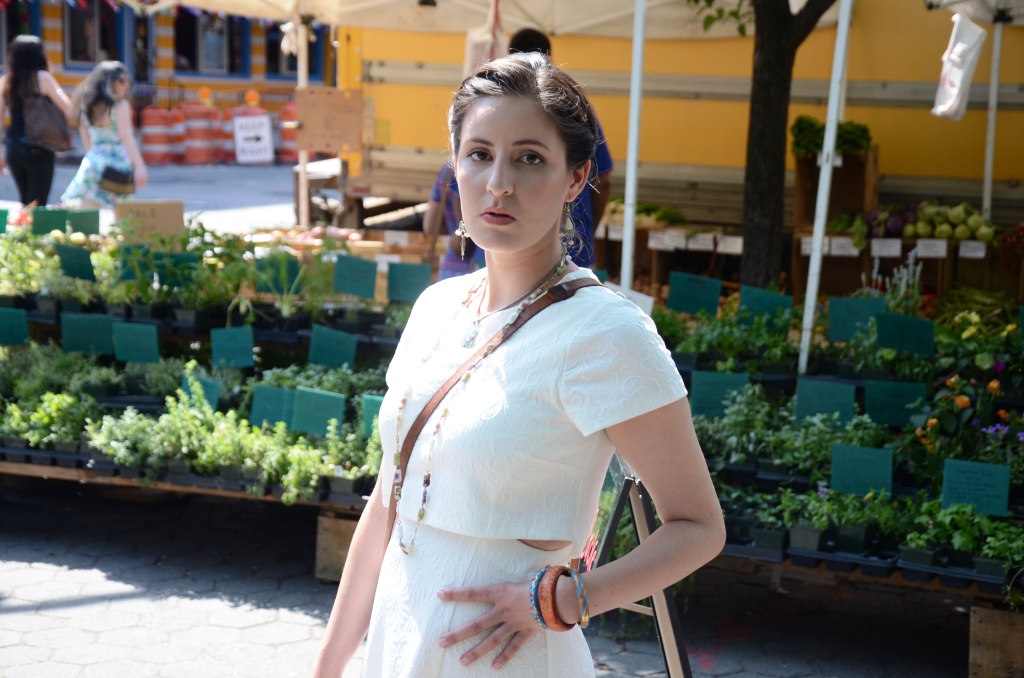 Sidney: What do you think about the fashion scene in New York?
Javinia: I don’t really think about it while I’m here. I only start thinking about New York’s fashion scene when I’m in other US cities because I’m reminded that not all metropolitan areas are diverse like New York. 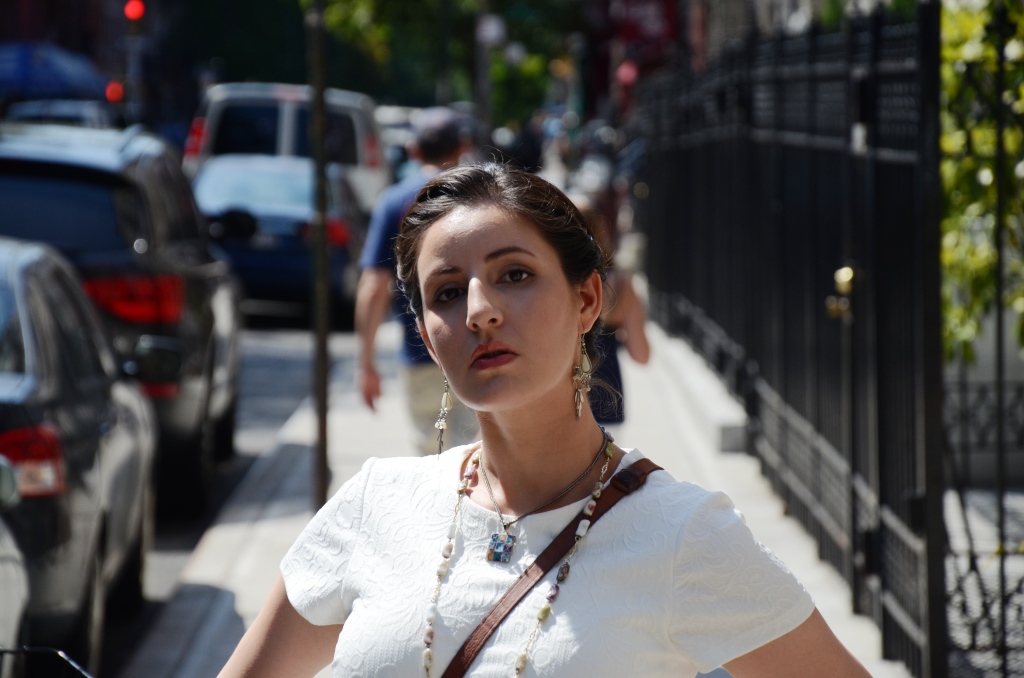 Sidney: Tell us a little bit about how you got started as a food entrepreneur in New York City.
Javinia: I’m Javinia, I lived in a few different places in New York and most of my family is from Arequipa, Peru. I was fortunate enough to grow up around cousins, aunts, grandparents, and a large group of family friends here that are also from Peru.

My dad was a US born chef, and when he traveled to Arequipa to meet my mother’s family, he tried alfajores for the first time. He came back to the US and started making them, and eventually taught me as well. Around six years ago, he knew he was going to pass away soon and I remember that he stocked our kitchen with brand new rolling pins, cookie cutters, knives, and pots and pans. He was aware that I never used rolling pins or cookie cutters for anything but making alfajores so I probably subconsciously read too much into this, and started making alfajores for other people after his passing. I named the service “Jimmito’s Alfajores”. His American name was Jimmy, but the way I heard him being addressed in my family was “Jimmito” so I thought it fitting. The alfajores were a larger size back then and I was primarily delivering late night to fellow students at The George Washington University.

My dad often spoke of wanting to open up a Peruvian restaurant but it was too much of a risk for us. That was probably another factor that led to the start of Jimmito’s Alfajores. I was young and I didn’t share the concerns and responsibilities that my dad had to consider. 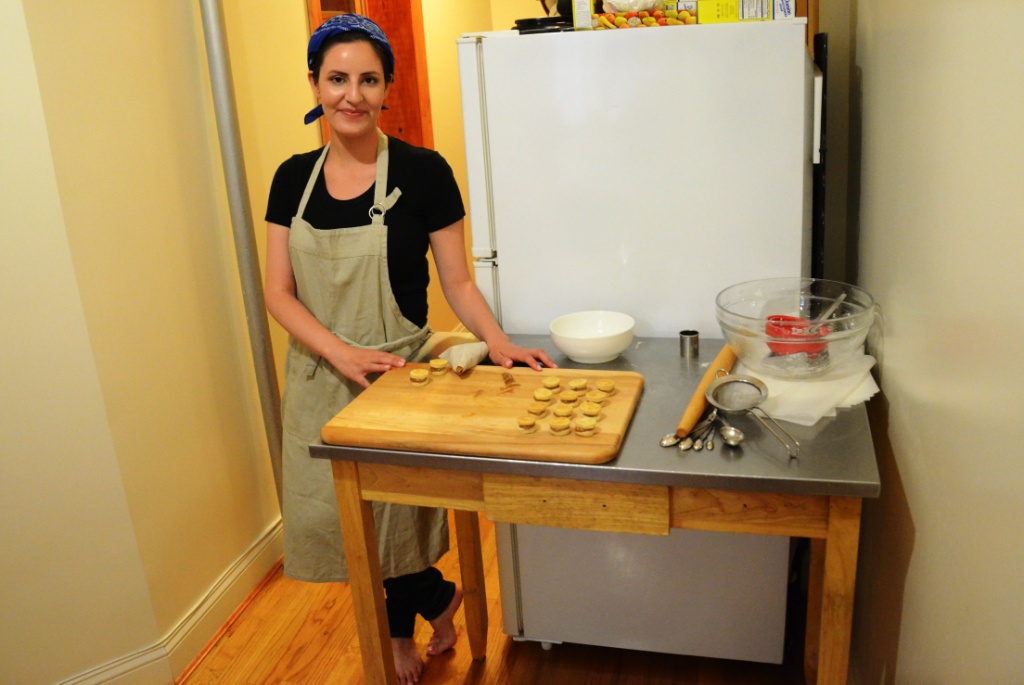 Sidney: Tell us a little about the Alfajores that you make, and how they are unique.
Javinia: My alfajores are miniature sized and they have a very flaky cookie. I did not start out like this but today, I make them 12 at a time. Each flavor has very simple ingredients and they all have dulce de leche on the inside. Besides the original flavor, I make Citrus Sriracha, Feliz Cumpleaños, Café con Leche, and Sesame Red Bean. I’m hoping to have a gluten-free alfajor ready soon and once the first version of that is ready, I’m going to be working on a dairy-free alfajor. 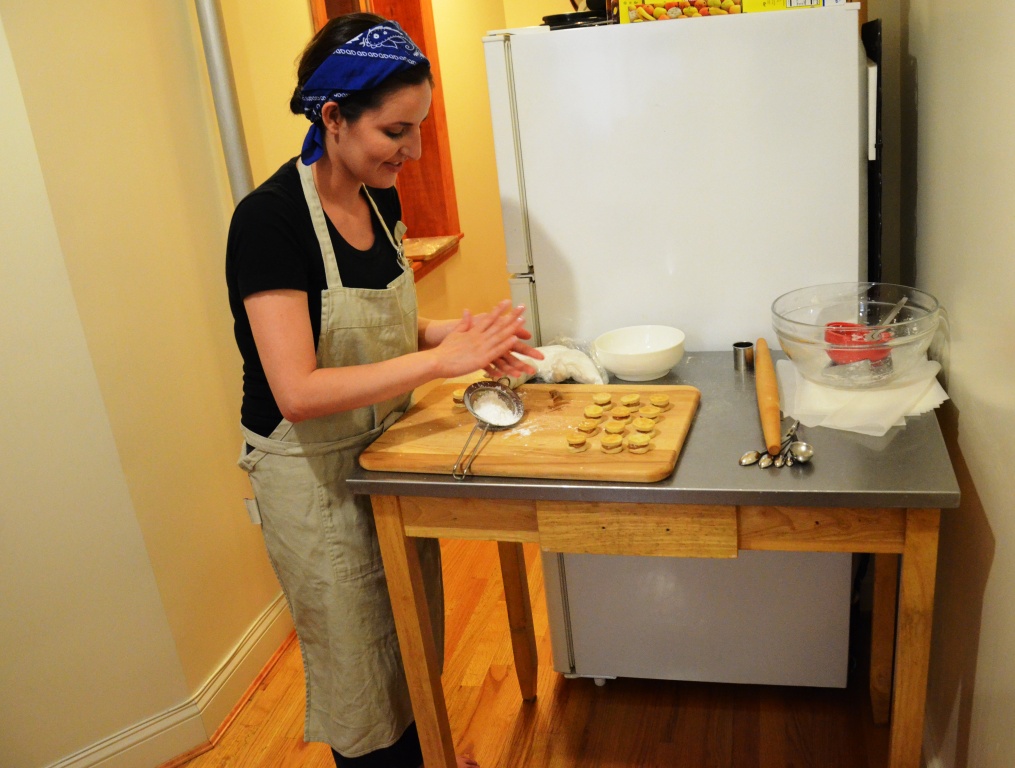 Sidney: What are your favorite cuisines?
Javinia: Peruvian is my favorite by far and Chinese is my second favorite.

Sidney: What are some of your favorite spots to eat out in New York?
Javinia: Hmm…the place I’ve been returning to lately is La Esquina to pick up their elotes. There’s usually no space to eat at the counter so I ask for them to go. One of my dad’s friends made elotes engulfed in melting cheese, in Jackson Heights in the 90s, but he’s no longer there (I’ve looked) so La Esquina is my substitute for now. Another favorite is Golden Shopping Mall in Flushing. 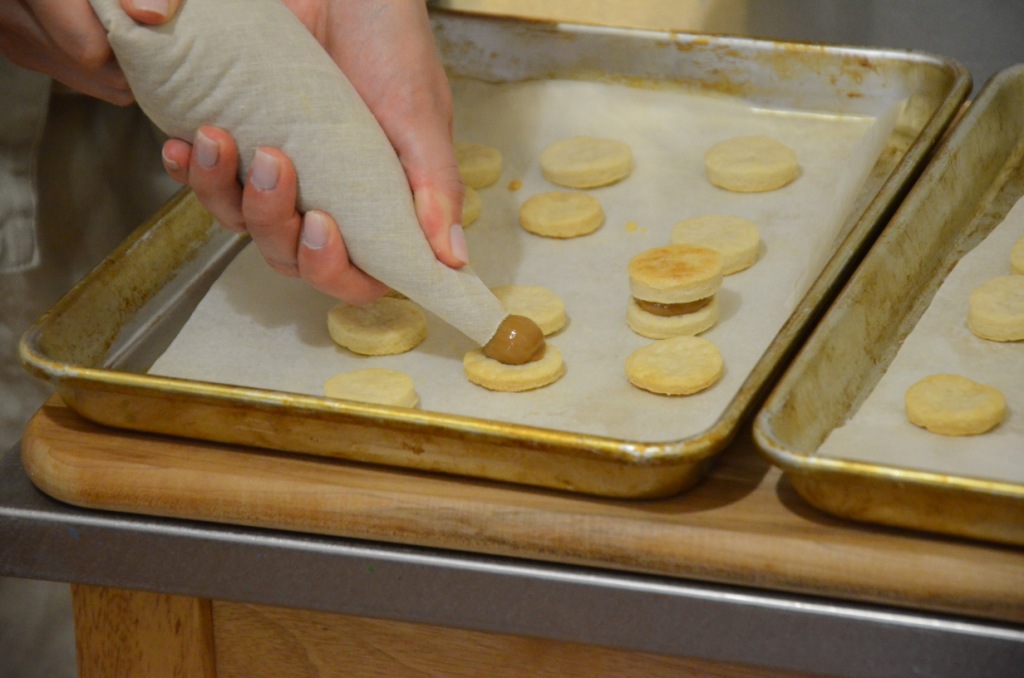 Sidney: What was the most difficult thing for you personally about starting out on your own?
Javinia: The most difficult thing was deciding to change the size or flavor of the original alfajores I grew up making. I used to think it would be disrespectful and I still feel uneasy about it from time to time. The alfajor has taken on various flavors and sizes in its lifetime. In Tacna, I’ve eaten wafer-like alfajores the size of my outstretched hand that have honey instead of dulce de leche on the inside. Peruvian cuisine has long incorporated flavors from other cuisines too, one of the most common styles in Peru is Chifa which is Chinese influenced. For example, the name of the Chifa dish “arroz chaufa” comes from the two words “chǎo” and “fàn”, which together mean “fried rice”. Despite all this, I think I’m not completely at ease because I personally don’t like eating today’s fusion Peruvian food. I can’t explain it well, I just don’t like the word “fusion.”

Sidney: How supportive were your family and friends regarding your decision to follow a non-traditional career path?
Javinia: It’s non-traditional when compared to what I studied, but I feel like it’s very commonplace when I think of the increasing trend of self-employment. The conversation with my family around whether or not I should be doing this evolved to discussing how this can be carried out in better ways. My friends are really supportive as well, they’ve all reached out to help in one way or another. 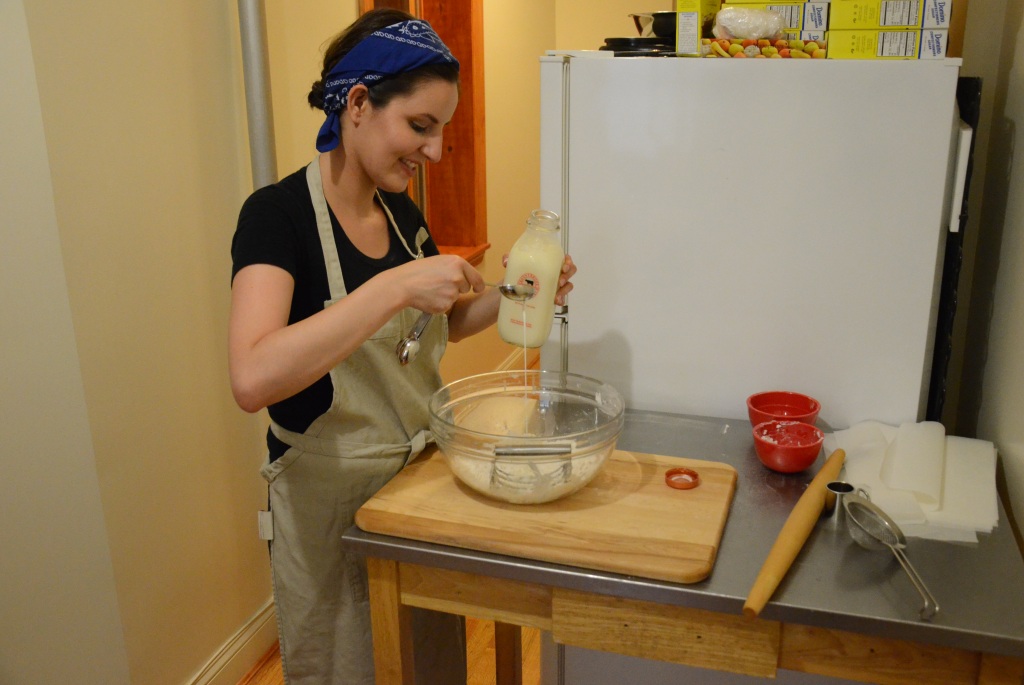 Sidney: Was it a tough choice quitting a full-time job? What factors were you weighing when you were taking that decision?
Javinia: It was a really tough choice for me. It took me a very long time just to obtain an internship in New York after college even with plenty of experience on my resume. My apprehension about transitioning my full-time focus was coming from wanting to hold onto something that once seemed impossibly out of reach.

At a certain point when I was juggling a few different jobs, I realized there was no way to move forward in all of them at the same time. I knew that I didn’t want to wait until the absolute breaking point to make a decision.

Sidney: What advice do you have for other young people in the city looking to start out on their own ventures?
Javinia: Talk to as many people as you can to hear their stories, whether they’re in your field or not. Know that you always have room to improve in every aspect of what you’re doing. Don’t glamorize the idea of “entrepreneurship” and don’t glamorize the food industry. 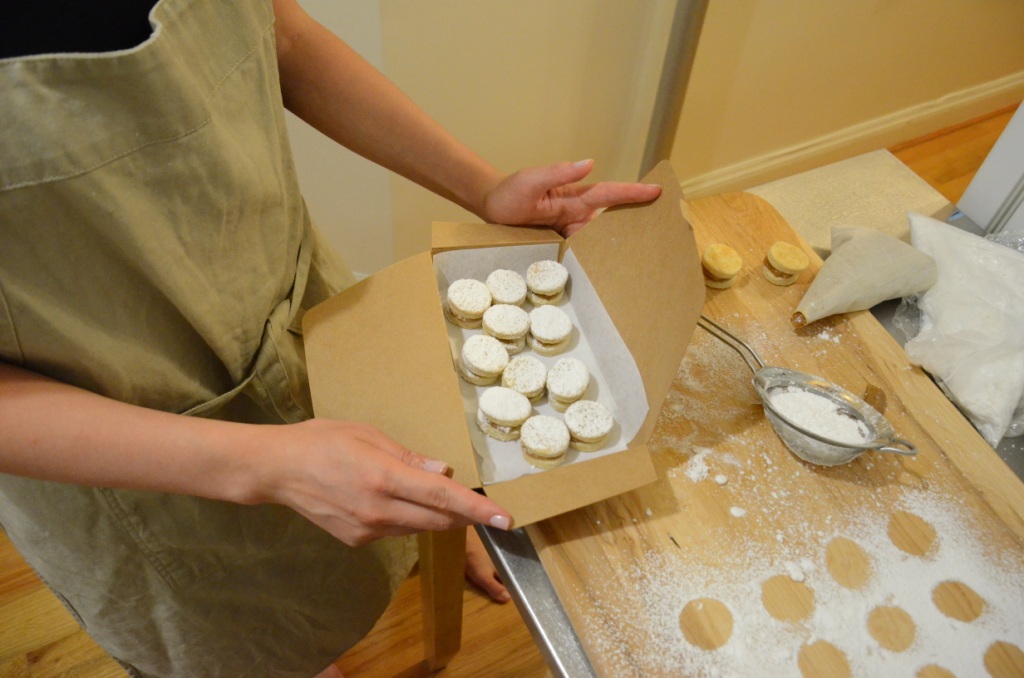 Sidney: The food industry in New York is known to be very competitive. How do you handle the competition and stand out?
Javinia: I reach out to other alfajor makers to chat and to order their alfajores. Everyone in the food industry that I met has been generous with their time and forthcoming with suggestions. My alfajores are miniature sized and the texture is quite different from most alfajores that I’ve eaten, but everyone has their own style and ingredient preference. There are always new ways to improve and I appreciate all the advice I’ve received from fellow food makers.